The Big 80s Were Great! 80s Plastics Technology? Not So Much.

The Issues with Zytel Magazines

Nearly as much as has been written about the issues regarding Zytel magazines for the M-11/NINE guns as the guns themselves. The main criticisms were primarily that the plastic feedlips would wear out prematurely, leading to feeding unreliability, and that the magazine bodies would sometimes split open, which would add to feeding issues — or simply dump your ammo all over the ground.

The springs in Zytel magazines also tended to be quite weak. The springs lacked the strength necessary to tightly push the bullets up against the feedlips, which all too often led to cartridges “nosing down” into the magazine body and causing a jam.

That’s When Shockwave Stepped In 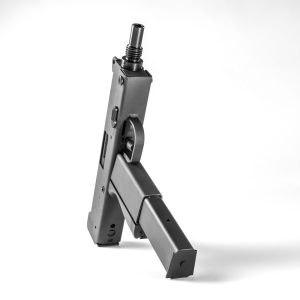 All these issues with the Zytel magazines created a demand for a better-designed magazine. That’s when Shockwave Technologies entered the picture for MAC owners. Working with a team of American engineers who had decades of experience in sheetmetal stamping, we designed, prototyped, tested, and—in 2014—began manufacturing and selling our ZMAG 30. The 50-round version—the ZMAG 50—followed several months later.

Shockwave’s ZMAGs are the perfect upgrade to liven up your M-11/NINE pistols and submachine guns. They’re designed to last generations with their durable steel construction, feed flawlessly with their polymer followers and dependable Wolff springs, and look attractive all the while with their gorgeous Cerakote finish. The ZMAGs also feature witness holes, so you can see at a glance how many rounds you have on tap at any time.

Strong, lightweight, easy to load, and simple to disassemble, Shockwave ZMAGs are the last word in M11/NINE magazines.

The metal 30-round Shockwave ZMAG for the Cobray M-11 (9mm and .380) is back in stock! Its 8.2 ounce weight and unbeatable design make it head and shoulders above competition.

The Shockwave ZMAG 30 fits and functions in all M-11 guns that originally shipped with the Zytel magazines:

*ZMAGs are not available for sale in the following states/areas: CA, CO, CT, MA, MD, NJ, NY, and Chicago*