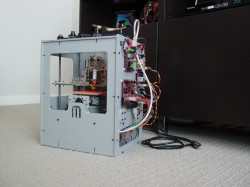 So we’re putting our 3D printer up for auction. Own a piece of firearms history. 😉 It’s an old Makerbot Cupcake. (What a name. Anyway…) It’s not much to write home about. But “back in the day,” I thought it was pretty cool. Hey, I built it myself. [Beats on chest.]

It was working until a couple of days ago. Then I had the bright idea to rebuild the “printhead.” In the process, I messed up the Nichrome wire that heats up the nozzle. It’s a half-hour fix. (You’ll need a new 6″ piece of Nichrome wire.) But I’m just not up for it. (Too many other things going on.) Once you replace that, you’ll be up and running again. We’re throwing in with the Makerbot a newer PC power supply, one almost-complete spool of 3mm ABS filament, a small spool of white ABS filament, all the extra little bits I have left over from when I built the “Grey Ghost,” and whatever else I can think of to throw in the deal.

Believe it or not, we used this Makerbot when we were prototyping the Raptor Grip for the Mossberg 500 and the Remington 870—and also the ZMAG follower. Gun parts! (I’m sure that still gives little Bre Pettis nightmares. LOL) Anyway, this little Makerbot was a trusty friend and business partner. But we need move on to bigger things.

Direct link to the auction. Yeah, ebay’s run by a bunch of bedwetters, but it’s the best venue for auctioning off such an item.

Be sure to bid early and bid often. 😉